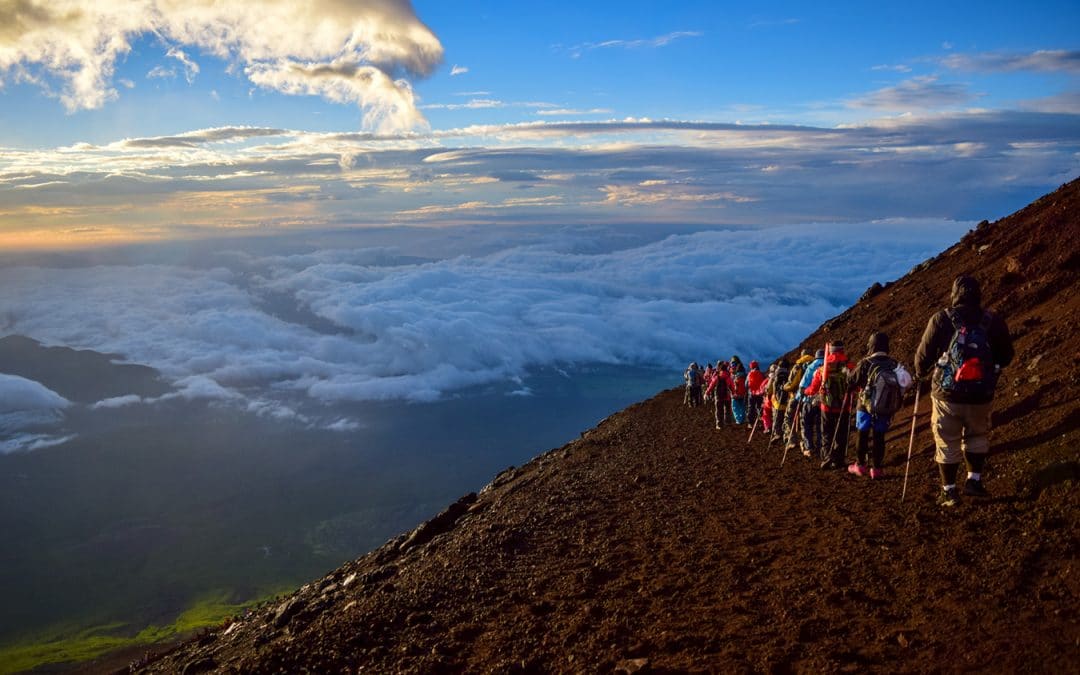 Located near the Pacific coast of central Honshu, roughly 100 kilometers west of Tokyo, Mt. Fuji towers over Japan at 12,388 feet and is the tallest mountain in the country. Mt. Fuji has become the most popular tourist destination in Japan and is arguably the most climbed mountain on Earth, with some 300,000 adventurers visiting every year from all over the world to meet the clouds over Japan. Mt. Fuji is one of the three holy mountains in Japan, named after the Buddhist goddess of fire, Fuchi. Mt. Fuji is also an active volcano, though it’s last eruption was December 6, 1707. The Fuji Five Lakes surround the peak, adding to the incredible view from the top, as well 474 square miles of Hakone Izu National Park. An anonymous Japanese monk first conquered the mountain in 1663 A.D. Since then, Mt. Fuji has become a beacon for wanderlust, with a third of climbers venturing from other countries each year. The mountain now has many facilities, including its own post office. Souvenir shops sell the basics—food, drinks, supplies, and even “canned summit air.” Climbing season is only permitted during summer months—early July through mid-September, as temperatures at Fuji’s peak hover around a chilly five degrees Fahrenheit, throughout the warmest season. Mt. Fuji consists of ten stations, with roads leading only as far as the fifth stations. Ascent and decent depends on which station climbers start from. Most choose to begin at station five. There are four stations at level five, each on different sides of the mountain. Ascent from a fifth station is generally around six hours and descent a couple of hours shorter. Stations offer facilities, snacks and sleeping huts, but sleeping huts need to be booked in advance and paid for through the Fujiyoshida City website. Climbers who purchase walking sticks can pay to have them stamped at each station as a token of their journey. Though Mt. Fuji does not require advanced climbing skills, the air is noticeably thinner when reaching higher altitudes and some of the terrain can be dangerous—steep in places, with large or loose rocks and other obstacles. Wind gusts and lingering snow patches are also a factor to be weary of. In Japanese fashion, the summit provides vending machines, food and beverages to quench climbers’ appetites while on top of the world.

For many, conquering Mt. Fuji is a spiritual and emotional feat that tests will and strength, both physically and mentally, with each person’s experience different from the next. It is not recommended to climb in darkness without rest—a climbing style referred to as “bullet climbing,” but many plan their ascent to reach the summit in the early morning, to view the sunrise from above the earth—a truly once in a lifetime experience. No matter how one chooses to take on this natural wonder, the humbling memories created and awe-inspiring sights are well worth the trip. To the Japanese, Fuji is sacred and scaling the mount can awake strength and clarity within oneself that was previously inept. “Aspire to be like Mt. Fuji, with such a broad and solid foundation that the strongest earthquake cannot move you and so tall that the greatest enterprises of common men seem insignificant from your lofty perspective. With your mind as high as Mt. Fuji you can see all things clearly. And you can see all the forces that shape events; not just the things happening near to you.”–Miyamoto Musashi 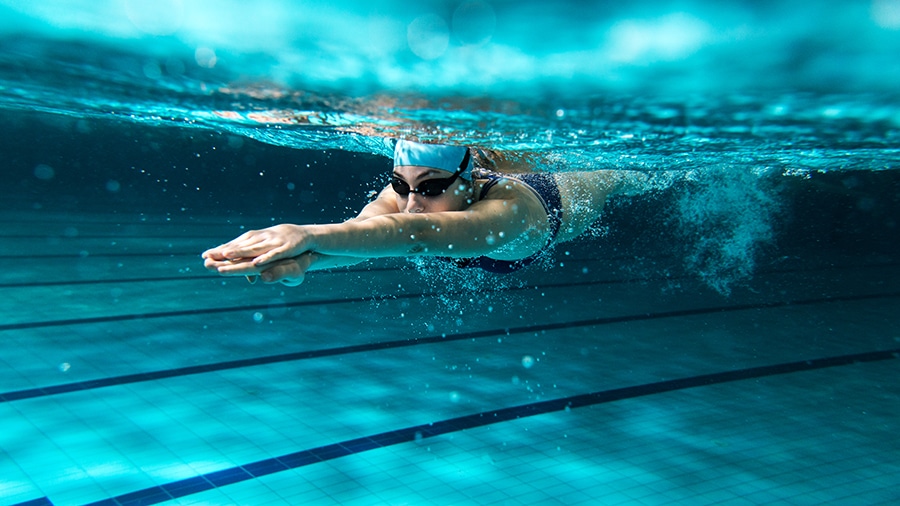 If you’re looking for a fun fitness challenge, try the 50 Mile Swim Club! Reach your fitness goals this year, or just challenge your friends to a race against

If you’re looking for a fun fitness challenge, try the 50 Mile Swim Club! Reach your fitness goals this year, or just challenge your friends to a race against the calendar by tracking your laps in the pool throughout the year. Trophies will be awarded to the first three finishers and every swimmer to meet 50 miles will take home a congratulatory T-shirt and bragging rights. Think you have what it takes to swim farther than anyone else on base? Don’t stop swimming after you get to 50! Additional trophies will be awarded to the three competitors who swim the farthest over the course of 2021. Registration is open throughout the year, but you will have to catch up to your competitors, so sign up early at the Outdoor Recreation Center.

Registration is open!
$25 per person

Walk/Run to the City 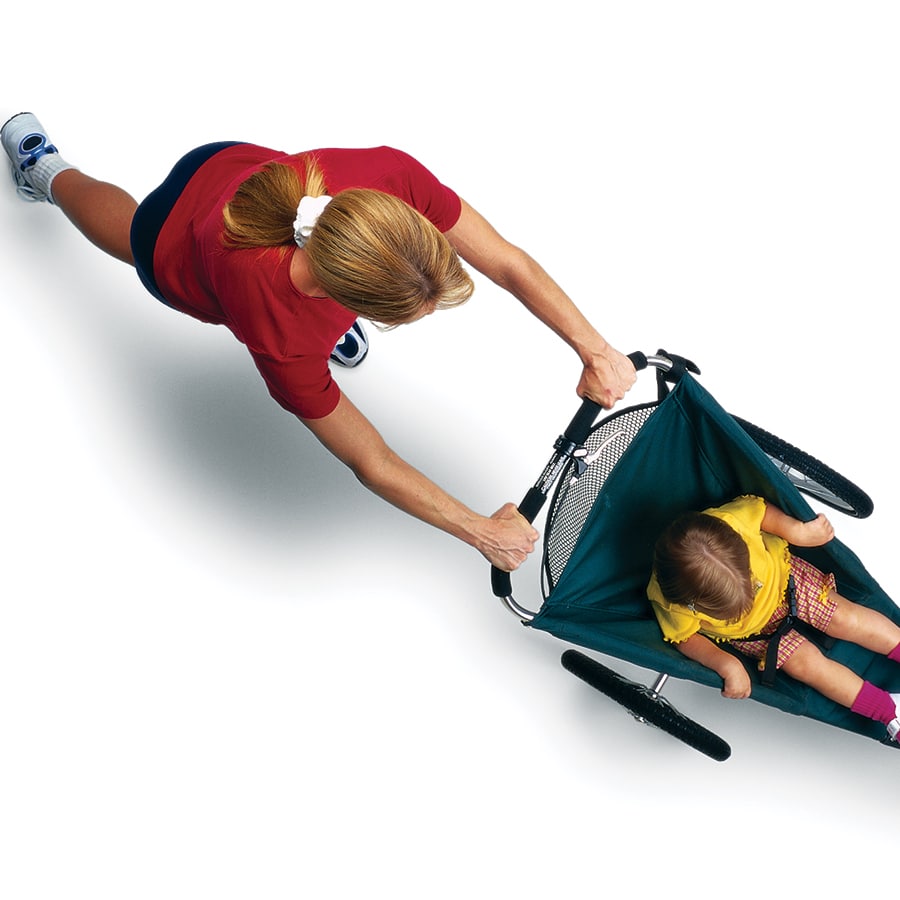 Participants will walk or run on a treadmill, track or nature trail and log their miles at the Potter Fitness Center front desk. For every milestone (city) reached they will receive a prize!